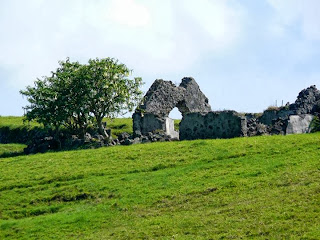 Traditional translations of poʻo kanaka suggest it means “human head;” however, in this case, it has a regional translation and is used to describe a flower, the pansy (folks thought the flower looked like a man’s head.)

It was also the name given to a man’s home.

He is said to have been the first to introduce the pansy flower in Hawaiʻi and he planted pansies around his house.  (Kimura)

Puapoʻo-kanaka (“The flower-that-looks-like-a-man”) eventually became the favorite of Waimea cowboys, who wore entire leis of pansies strung round their flopping vaquero hats.  (Korn)

The house stood within a level clearing at a spot called Puʻukapu, along the trail leading to the more upland forested area up Mauna Kea known as Manaiole, what we call Mānā, today.

The house, built in the 1830s, was made of rubble-and-mortar construction.  Rocks were formed into walls and plastered over with putty lime mortar (the lime obtained from ground coral.)  Rubble ruins remain of the house site, today.

The home was described as an Irish stone cottage.

It’s not clear what the man’s real name was – some suggest it was initially William Wallace.  An Irishman, he came to Hawaiʻi aboard a whaling ship that landed at Kawaihae (about 1834.)  He left the ship and went up the hill to Waimea, where he settled – there, he took the name Jack Purdy.  (Kimura)

Some suggest Purdy, along with fellow Waimea resident John Palmer Parker, can be considered the first cowboys in Hawaiʻi.  They started out as bullock hunters, selling their salt beef, hides and tallow.

In the early-1830s, trade in sandalwood slowed down as island forests became depleted.  At about the same time, whaling ships hunting in the north Pacific began wintering in Hawaiian waters.

Ships provisioning in Hawaiʻi ports provided a market for salt beef, in addition to hides and tallow.  With the economic push of providing provisions to the whaling fleets, ranching became a commercial enterprise that grew in the islands.

Parker took a more business-like approach and took advantage of the opportunities of the day and established the Parker Ranch in the fledgling livestock industry.  Purdy was a rowdy, living the rugged life, typical of his peers in the early American West.  (Bergin)

A real or tall tale of his exploits (written in 1857) tells how Jack Purdy, mighty bullock hunter and expert guide, together with his employer and hunting companion, Mr. Julius Brenchley, succeeded without firearms – in fact not even equipped with their usual lassos – in capturing a ferocious wild bull and in killing the beast when he failed to extricate himself from a mudhole; and then celebrated their victory with a deserved steak dinner fresh off the carcass.  (Korn)

In 1832, Purdy married into Hawaiian royal lineage when he took Keawe-maʻu-hili (daughter to Kewae-a-heulu and Kaʻakau) as his bride.  Several of his children from that and his second marriage were respected cowboys.   (Bergin)

His grandson, Ikua Purdy, made headlines and national fame, when he won the World’s Steer Roping Championship in Cheyenne, Wyoming – roping, throwing and tying the steer in 56 seconds (on a borrowed horse.)  Ikua had worked at Parker Ranch, he later moved to Maui to ʻUlupalakua Ranch (he died there in 1945.)

The image shows a Poʻo Kanaka, the ruins of the former stone cottage of Jack Purdy (Parker Ranch.)    In addition, I have included other images in a folder of like name in the Photos section on my Facebook and Google+ pages.

People, places, and events in Hawaiʻi’s past come alive through text and media in “Images of Old Hawaiʻi.” These posts are informal historic summaries presented for personal, non-commercial, and educational purposes.

Hoʻokuleana LLC is a Planning and Consulting firm assisting property owners with Land Use Planning efforts, including Environmental Review, Entitlement Process, Permitting, Community Outreach, etc. We are uniquely positioned to assist you in a variety of needs.